Have you got stuck? Need Help? Join our discord server, ask your doubts & get support from our experts.
Join Discord Now

We have been given a 64bit binary file to work with.

Run the chall file on gdb and looking into the functions present in it . {command info functions} 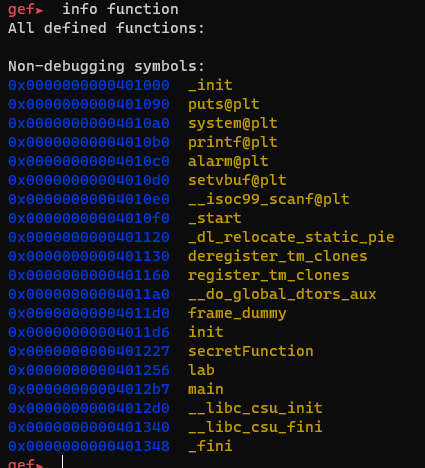 The functions in this challenge that are useful for us are

Lets look at the decompiled code in IDA/Ghidra

The main() function calls lab() first which looks like this.

Oh wow !! So now in this function we see that we are being guven the flag if this gets executed.

But one thing to observe is its neither called in main() nor it is called in lab().

So lets use the vulnerabilty found to exploit this program and craft the payload.

First we will fill the buffer with the required bytes ie. 32.

Then we have to overwrite the rbp with another 8 bytes to reach the rip in the stack frame . So now the payload would look like.

Now that we have reached rip we will add the address of secretFunction() to our payload.

Videos to help get started

Get help from our community